"Invento" (Invention) develops a theory on perception of the sound, for this aim, I didn't want to use a conventional language. Thus I set out to create one which I call 'etymophonic language', that phonetically could express what it is not possible to be said with words, to deal with the origin of feelings. I understood that in this work the most important was the phonetic intention or phonetic symbol than the etymologic or the explanation.

This theory has an almost mystical aspect. It is based on a very deep belief, consisting of feelings that the matter is daughter to the sound and not as we understand it in our reality. The sound can create a sensation, then a thought and finally a life form. I believe that we are what we listen...

For this work I used elements that I considered important as to represent what the last century was like: vinyl records, radio waves, etc. I wanted to represent the past and the future, not the present. 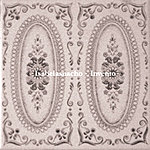